My best time at the Einstein Marathon and new athletic goals

A good week ago on September 29th, 2019 I ran my eighth marathon. That was a very important goal for me because almost three years ago I was told that I would probably never be able to do this again due to a foot injury with subsequent operations. Nevertheless, I made it and even set a new personal record.

In today’s article I want to briefly introduce the Einstein Marathon as a run and summarize my run. Finally, I will then say a few words about how I will continue and what my next sporting goals will be.

About the Einstein Marathon as a running event

With not quite 700 starters on the marathon distance, the Einstein or Sparkasse Marathon in Ulm is one of the somewhat smaller marathons. Because the team started and ran together with the relay team and the half marathon runners, the starting field still looked pretty powerful. 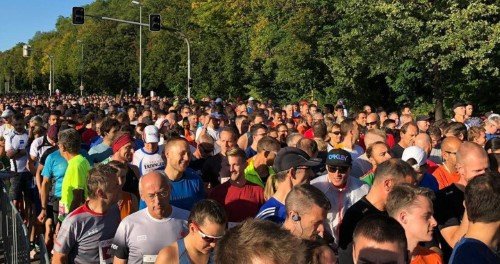 The event, which celebrated its 15th anniversary this year, was really very well organized. For example, there were more than sufficiently well-equipped refreshment points. The crowd at these was also limited. There were also many helpers and rescue workers distributed along the entire route.

The route through Ulm, Neu-Ulm and along the Danube was largely very contemplative. It was a bit annoying that sections of the route had to be run twice. A few sections of the route were also quite narrow. The marathon and half marathon runners start and run together 21.1 kilometers here. It got a bit tight one or the other time and we had to overtake, evade or brake in a tight space so as not to collide with other runners

After all, the double route had the advantage that the spectators had less route to spread over. The spectator factor is definitely not to be underestimated at such a run.

I also noticed the audience very positively. Of course, significantly fewer people watched and cheered the runners on than at larger running events. For this, a few spectators really made the effort and drove alone (or in small groups) to remote sections of the route to cheer on the participants.

All in all a nice event with a pleasant field that I can recommend to every runner.

Brief summary of my run

The conditions were almost perfect when the starting signal for the marathon was given shortly after nine o’clock. The sun was shining at about 12 degrees and the legs felt very good. In the course of the race the temperature rose to around 20 degrees. For me the weather couldn’t have been better.

Under these conditions we started with a realistic target time of 03:45:00. In doing so, we were guided by the Pacemaker from the start. However, it was not constant enough for us, which is why we overtook it after about 16 kilometers and ran according to our clocks.

Our split times were also almost perfect, as planned. However, as can always be the case with such a long run, we then faced two or three little problems. For example, from kilometer 21 I started having problems with my left Achilles tendon and had to adjust my running style a little to relieve them. By the way, she hasn’t forgiven me for the run to this day. 😉

At 30 km it suddenly became really difficult, even though we had run beyond it several times during training. When my running partner Katharina was caught by the man with a hammer at kilometer 36, she wanted to give up at short notice. However, I was able to convince her to persevere. After all, we had invested a lot of time over half a year and trained together towards this goal.

We slowed down significantly, but didn’t stop running. After 03:49:24 we arrived at the finish, broken but proud and happy. Even if that was slower than our target time, I’m very proud of our time and our performance. Finally you should consider that this was Katharina’s very first marathon, I am probably a bit more strength athlete than running athlete and that was my first marathon after a long break from injury. 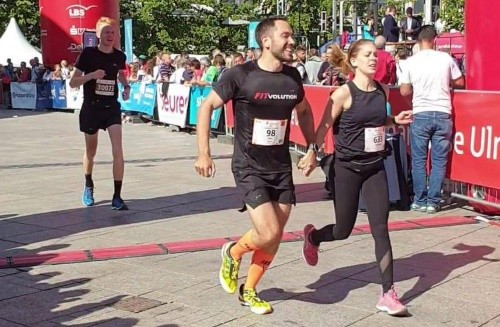 Katharina and I at our joint finish

I would like to take this opportunity to thank my training partner Katharina once again for pulling me through the training so consistently and ultimately so bravely the run. I don’t know if that would have gone so well on its own and it certainly wouldn’t have been so much fun.

And what’s next? My next sporting goals

Now some people are asking me what’s next for me. Of course, I also asked myself the question and thought about various things.

But first I don’t want to put too much pressure on myself for a few more weeks. The preparation for the marathon was very demanding and restrictive. Now I want to allow myself a little more flexibility. This also suits me on my upcoming trip to the USA. 😉

Nevertheless, I have already thought about where I would like to set my next priorities.

I’ve lost over 15 pounds since the beginning of the year. Much of it was certainly fat and therefore absolutely planned. However much I tried to maintain my muscles as much as possible, I still lost some muscles through the specific training. I lost a little more mass than I would like on my legs in particular.

So my next goal is to build some muscle again. This also includes significantly increasing my strength values ​​again, particularly in the most important basic exercises bench press , squats and deadlifts .

I have decided to put on about ten kilos again in the upcoming mass phase. Let’s see how close I can get to my old power performance records.

I want to (for the time being) concentrate on shorter distances. Above all, the marathon was something I wanted to prove to myself again. Somewhat shorter distances can be combined with more muscle mass, however.

I want to try to maintain my running performance on the middle distance to some extent and to compete again in the half marathon in Hanover in April. Maybe I’ll even break my personal half marathon record of 1:44:17 in 2016 in this way. That would be pretty cool with about eight kilos more than it was back then.

I’m not putting any pressure on myself in this regard and will wait and see how my training develops.

It was so far from me to the Einstein Marathon and my other goals for the coming months. I hope that I was able to give you an interesting insight with the article.

BCAAs and their effects – how useful is it really to be taken?